Get The Latest SCOOP 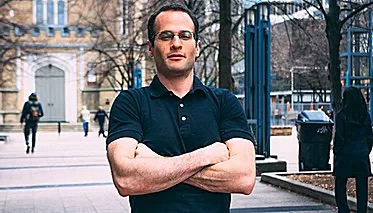 Meet Summit’s newest Contributor and Collaborator, Benjamin Stecher. Benjamin is a Parkinson’s Patient Advocate, who wanted to better understand his diagnosis of Parkinson’s disease (PD) better. To do so, Benjamin traveled around the globe interviewing the top researchers and visiting their labs.

Today, Benjamin is home waiting for COVID-19 travel restrictions to lift because his travels are far from over…..

Why We Need Biomarkers

We don’t. Despite billions of dollars and countless hours spent in labs around the world looking for it, there is still nothing in biology that we can point to and say that is Parkinson’s. This is a big problem and a key part of the reason why we still don’t have any therapies that can slow, let alone stop it from progressing. How do you stop what you cannot see or measure?

That is what biomarkers would allow us to do. A biomarker is a biological signal we can measure that tells us something meaningful about the state of a person’s disease, like blood-glucose levels in diabetics which completely revolutionized how we monitor and treat diabetes.

A big part of the reason why we have no way of measuring Parkinson’s diseases is because of how we have tried to look for it. All biomarker studies have used the clinical labels we have to guide our search for a biological signal. That is the exact opposite of the approach other fields have taken. Like oncology, most notably, we have to start from the biology and measure it without the biases created by the clinical labels doctors generate at the bedside. If we are going to find biomarkers that can tell us something relevant about the biology of someone with Parkinson’s disease, it may be relevant for few others given the wide spectrum of disorders that leads to what we call Parkinson’s disease.

Thankfully there is a project like this that has just begun. It is called the Cincinnati Cohort Biomarker Program. Over the next 5 years, this cohort study will be recruiting five thousand people, two thousand with Parkinson’s or Parkinson-like diseases, two thousand with Alzeimer’s or Alzheimer-like diseases, and one thousand healthy controls. The team will analyze data by letting biology guide discovery in their hunt for biomarkers relevant for people with neurodegenerative diseases. The main goal is to eventually match biologically defined subtypes of people to specific therapies for their particular “brand” of disease.

To learn more about this exciting new program go to ccbpstudy.com

*Full disclosure – I am a contracted consultant and patient advisor for the Cincinnati Cohort Biomarker Program.

NOTE FROM SUMMIT: Summit is also a supporter of the Cincinnati Cohort Biomarker Program.

Benjamin Stecher was born in Nairobi, Kenya but grew up just outside Toronto, Canada. He studied history and philosophy at the University of Guelph, but as soon as he graduated he took off and spent most of the next decade living and working in East Asia as an education consultant.

All that changed when, at 29 years old, Benjamin was diagnosed with Parkinson’s disease. The promising future he had been building towards suddenly faded and was replaced by a gloomy fog of uncertainty and despair. As his disease progressed, he realized that he needed to come back home to learn how to better manage his disease.

But, as he started visiting labs and attending conferences, he soon found himself enthralled by the rampant pace at which biomedical science has progressed in the 21st century. He spent the next couple of years traveling the world visiting research centers and pharmaceutical companies to learn from the top minds in the field all that he could about this disease and what therapies were on the horizon.

He now speaks regularly at academic centers and biotech companies on issues related to neurodegenerative diseases, research advocacy and healthcare. He is also the founder of Tomorrow Edition (tmrwedition.com), and a patient advisor to several organizations including the Toronto Western Hospital Movement Disorder Clinic and the World Parkinson’s Congress. Benjamin has also authored several peer-review papers and serves on the editorial board of the Journal of Parkinson’s. Ben and Dr. Alberto Espay co-authored the recently released book, “Brain Fables” (published by Cambridge University Press).

Why We Need Biomarkers. Stecher, September 2020